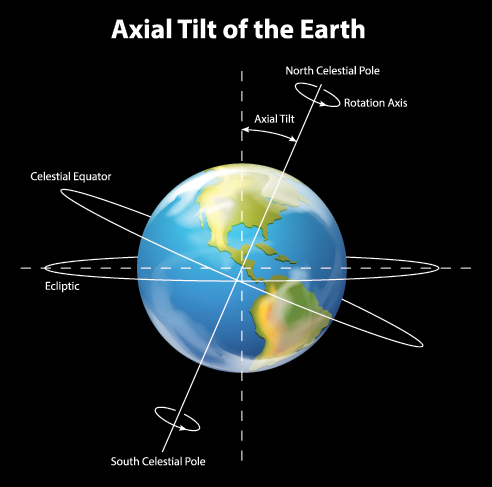 Context
o A study published in Geophysical Research Letters of the American Geophysical Union (AGU) says that due to the significant melting of glaciers because of global temperature rise, our planet’s axis of rotation has been moving more than usual since the 1990s.
More about news
o Earth’s axis
o The Earth’s axis of rotation is the line along which it spins around itself as it revolves around the Sun. The points on which the axis intersects the planet’s surface are the geographical north and south poles.
o The location of the poles is not fixed, however, as the axis moves due to changes in how the Earth’s mass is distributed around the planet. Thus, the poles move when the axis moves, and the movement is called “polar motion”.
o According to NASA, data from the 20th century shows that the spin axis drifted about 10 centimetres per year. Meaning over a century, polar motion exceeds 10 metres.
o New Study
o Polar motion is caused by changes in the hydrosphere, atmosphere, oceans, or solid Earth. But now, climate change is adding to the degree with which the poles wander.
o Since the 1990s, climate change has caused billions of tonnes of glacial ice to melt into oceans. This has caused the Earth’s poles to move in new directions.
o From 1995 to 2020, the average speed of drift was 17 times faster than from 1981 to 1995. Also, in the last four decades, the poles moved by about 4 metres in distance.
o Causes of Polar Drift
o Ice Melting – The faster ice melting under global warming was the most likely cause of the directional change of the polar drift in the 1990s.
o As glaciers melt, water mass redistributes, causing shifts in the planet’s axis.
o Change in Non-Glacial Regions (Terrestrial Water Storage) – Due to climate change and unsustainable consumption of groundwater for irrigation and other anthropogenic activities.
o Groundwater Depletion – As millions of tonnes of water from below the land is pumped out every year for drinking, industries or agriculture, most of it eventually joins the sea, thus redistributing the planet’s mass.