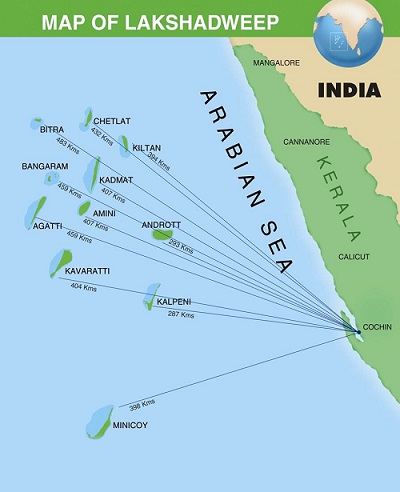 CONSTITUTION OF LAKSHADWEEP DEVELOPMENT AUTHORITY:
 It empowers the government, identified as the administrator, to constitute Planning and Development Authorities under it to plan the development of any area identified as having “bad layout or obsolete development”
 The authority would be a body corporate with a government-appointed chairman, a town planning officer and three ‘expert’ government nominees besides two local authority representatives.
 These authorities are to prepare land use maps, carry out zonation for type of land use and indicate areas for proposed national highways, arterial roads, ring roads, major streets, railways, tramways, airports, theatres, museums etc.
 Only cantonment areas are exempted from this.

DEFINES ‘DEVELOPMENT’:
 It defines development as the carrying out of building, engineering, mining, quarrying or other operations in, on, over or under land, the cutting of a hill or any portion thereof or the making of any material change in any building or land or in the use of any building or land.

FEES FOR CHANGING ZONES:
 It stipulates that islanders must pay a processing fee for zone changes.
 It implies that localities would be required to pay fees to gain approval to alter zones as per the development plan, as well as fees for permission to develop their own land.

PENALTIES:
 It establishes penalties such as imprisonment for obstructing the development plan’s work or workers.

PEOPLE’S CONCERN:
REAL ESTATE INTERESTS:
 People suspect that this might have been issued at the behest of ‘real estate interests’ seeking to usurp the small holdings of property owned by the islanders, a majority of them (94.8% as per the 2011 census) belonging to the Scheduled Tribes (ST).
 Proposals to bring real estate development concepts such as ‘transferable development rights’ to the island have raised people’s fear of forced migration en masse.

FORCIBLE RELOCATION & EVICTION:
 It vests such powers with the authority that it can prepare comprehensive development plans for any area and relocate people regardless of their will.
 It provides for forcible eviction, puts the onus on the owner to develop his holding as per the plan prepared by the authority as also to heavily penalise them in the event of non-compliance.

DESTRUCTION OF CULTURE:
 The island community is a close-knit group with families living in close proximity. The regulation will destroy the way of life practised by them for generations.

ECOLOGICAL CONCERNS:
 It is neither ecologically sustainable nor socially viable and the people’s representatives were not consulted before drafting it.

LAKSHADWEEP
ABOUT:
 India’s smallest Union Territory, Lakshadweep is an archipelago consisting of 36 islands with an area of 32 sq km.
 It is directly under the control of the Centre through an administrator.

THERE ARE THREE MAIN GROUP OF ISLANDS:
1. Amindivi Islands
2. Laccadive Islands
3. Minicoy Island.
 Amindivi Islands are the northernmost while Minicoy island is the southernmost.
 All are tiny islands of coral origin (Atoll) and are surrounded by fringing reefs.
 The Capital is Kavaratti and it is also the principal town of the UT.
 Pitti island, which is uninhabited, has a bird sanctuary.

POPULATION:
 More than 93% of the population who are indigenous, are Muslims and majority of them belong to the Shafi School of the Sunni Sect.
 Malayalam is spoken in all the islands except Minicoy where people speak Mahl which is written in Divehi script and is spoken in Maldives also.
 The entire indigenous population has been classified as Scheduled Tribes because of their economic and social backwardness. There are no Scheduled Castes in this Union Territory.
 The main occupation of the people is fishing, coconut cultivation and coir twisting. Tourism is an emerging industry.
 Organic Agricultural Area: Recently, the entire Lakshadweep group of islands has been declared as an organic agricultural area under the Participatory Guarantee System (PGS) of India.