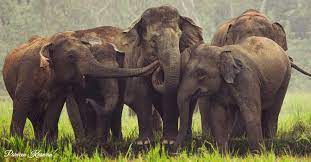 WHY IN NEWS
 According to the Ministry of Environment, Forest and Climate Change (MoEFCC), a total of 186 elephants were killed after being hit by trains across India between 2009-10 and 2020-21.

MEASURES TAKEN:
 A Permanent Coordination Committee has been constituted between the Ministry of Railways and the MoEFCC for preventing elephant deaths in train accidents.
 Clearing vegetation along railway tracks to enable clear view for loco pilots, construction of underpass/overpass for safe passage of elephants, regular patrolling of vulnerable stretches of railway tracks, warning sign boards, etc.
 The MoEFCC has released Rs. 212.49 crore to elephant range States under the Project Elephant between 2011-12 and 2020-21.
 Elephant was declared a ‘national heritage animal’ in 2010, considering the valuable ecological services rendered by the species.
 Elephants are architects of the forest and woodland ecosystem (keystone species).
 Considered nature’s ‘gardener’, they are key in shaping the landscape, in pollination,
germination of seeds and improving the fertility of forest soil with heaps of dung.

PROJECT ELEPHANT:
 It was launched in 1992 to provide financial and technical support to wildlife management efforts by states for their free ranging populations of wild Asian Elephants.
 It is a Centrally Sponsored Scheme (CSS).

ELEPHANT CENSUS:
 Elephant census is conducted once in 5 years under the aegis of Project Elephant. Last Elephant Census was conducted in 2017.
 According to the Elephant Census 2017, India’s Asian elephant population is 27,312.
 The numbers are lower than from the last census estimate in 2012 (between 29,391 and 30,711).
 Karnataka has the highest number of elephants, followed by Assam and Kerala.

RELATED GLOBAL INITIATIVE
 The Monitoring the Illegal Killing of Elephants (MIKE) programme, launched in 2003, is an international collaboration that tracks trends in information related to the illegal killing of elephants from across Africa and Asia, to monitor effectiveness of field conservation efforts.

RIGHT TO PASSAGE OF THE ANIMALS:
 Recently, the Supreme Court (SC) upheld the 2011 order of the Madras High Court (HC) on the Nilgiris elephant corridor, affirming the right of passage of the animals and the closure of resorts in the area.