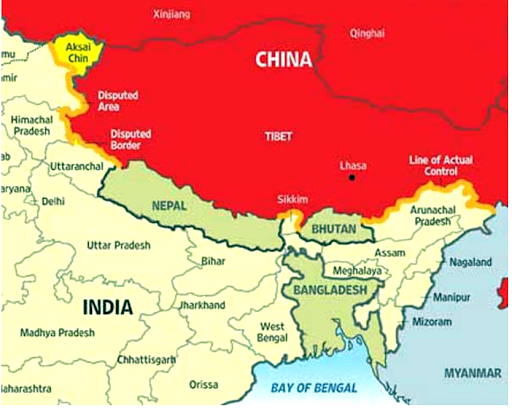 WHY IN NEWS?
 Recently, China has completed construction of a strategically significant highway enabling greater access to remote areas along the disputed border with Arunachal Pradesh in India.

IN DEPTH:
 The construction began in 2014 and is part of a wider infrastructure push in border areas in Tibet.
 The highway passes through the Grand Canyon of the Brahmaputra river (Yarlung Zangbo in Tibet).
 The Brahmaputra is the longest river in Tibet and its valley is the world’s deepest with a 7,000-metre drop from the highest mountain peak to the lowest basin.
 It connects Pad Township in the city of Nyingchi and Medog County.
 Nyingchi and Medog County both are located in Tibet Autonomous Region (TAR), China.
 Medog is the last county in Tibet, which is located close to the Arunachal Pradesh border.
 China claims Arunachal Pradesh as part of South Tibet, which is firmly rejected by India. The India-China border dispute covers the 3,488-km-long Line of Actual Control (LAC).
 The Highway will shorten the road length connecting the city proper of Nyingchi and Medog County and will reduce the travel time by eight hours.

OTHER STRATEGIC CONSTRUCTIONS BY CHINA:
RAILWAY LINE:
 In 2020, China had begun work on a strategically significant railway line that will link Sichuan province with Nyingchi in Tibet, which lies close to Arunachal Pradesh border.
 It is the second major rail link to Tibet after the Qinghai-Tibet railway that opened in 2006.

NEW VILLAGES:
 In January 2021, there were reports of Chinese construction of three villages in Arunachal Pradesh 5 kilometres from the Bum La pass.
 In 2020, satellite images emerged showing a new village called Pangda built 2-3 km into what Bhutan sees as its land.
 In 2017, the TAR government launched a plan to build moderately well-off villages in border areas.
 Under this plan 628 first line and second line villages — referring to those right on the border and others in remote areas slightly further within — would be developed in the prefectures of Ngari, Shigatse, Shannan and Nyingchi, along China’s borders with India, Bhutan and Nepal.

CONCERNS FOR INDIA:
 The highway is also expected to play a key role in the surveying of and planning for the mega Yarlung Zangbo hydro-power project that China is planning to build at the canyon in the same Medog county, triggering unease among downstream countries like India.
 A highway connecting the border will largely improve the efficiency and convenience of military personnel and material transportation and logistical supplies in the border area.

STEPS TAKEN BY INDIA:
 India will spend 10% funds of the Border Area Development Programme (BADP) only to improve the infrastructure along the China border.
 The Border Roads Organisation (BRO) constructed the Daporijo bridge over Subansiri river in Arunachal Pradesh.
 It links roads leading upto the LAC between India and China.
 Foundation of a tunnel at Nechiphu in West Kameng district of Arunachal Pradesh has been laid down which will shorten travel time for troops till the LAC through Tawang, which China claims to be its territory.
 A tunnel is being constructed under the Se La pass in Arunachal Pradesh which connects Tawang to the rest of Arunachal and Guwahati.
 The state government of Arunachal Pradesh has advocated selection of 10 census towns along the India-China border as pilot projects for infrastructure development in order to stop people living along its international borders, specifically with China, from migrating to faraway urban centres in the State.
 Sisseri River Bridge, located at lower Dibang Valley in Arunachal Pradesh, connects Dibang Valley and Siang.
 In 2019, the Indian Air Force inaugurated resurfaced runway at India’s easternmost Village-Vijaynagar (Changlang district) in Arunachal Pradesh.
 In 2019, the Indian Army conducted exercise ‘HimVijay’ in Arunachal Pradesh and Assam with its newly created Integrated Battle Groups (IBG).
 Bogibeel bridge, which is India’s longest road-rail bridge connecting Dibrugarh in Assam to Pasighat in Arunachal Pradesh was inaugurated in 2018. It will facilitate quicker movement of troops and equipment to areas near the India-China border.