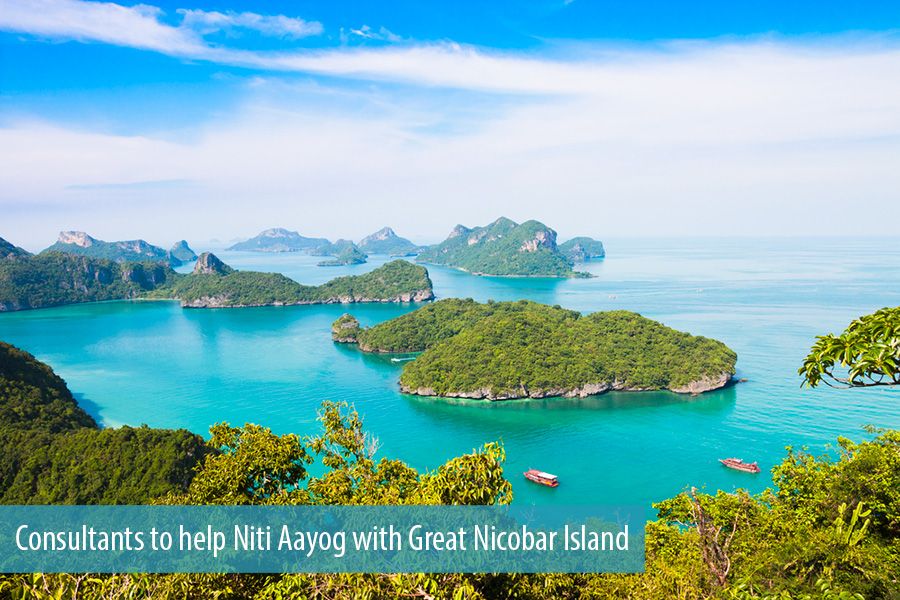 CONTEXT
CLIMATE AND CLEAN AIR COALITION (CCAC)
 It is voluntary partnership of governments, civil society and private sector to protect the dimate and improve air quality through actions to reduce short-lived climate pollutants.
 The initial focus is on methane, black carbon, and HFCS.
 India joined the CCAC in 2019.
 Recently, the Environment Appraisal Committee which flagged concerns over the project has now ‘recommended’ it ‘for grant of terms of reference’ for Environmental Impact Assessment (EIA) studies.
o In August, 2020 the Prime Minister had declared that the Andaman and Nicobar Islands will be developed as a “maritime and startup hub”.

MORE ABOUT PLAN
 The plan proposes the construction of a transshipment terminal, a greenfield international airport, township and
area development and a 450 megavolt amperes gas and solar based power plant on Great Nicobar, the southernmost and largest of the Nicobar Islands, and India’s southernmost territory.
 The International Container Transshipment Terminal will come up in the Galathea Bay, in the south eastern part of the Great Nicobar island, only 90 km away from the western end of the Malacca Strait o Transshipment involves
offloading cargo from one ship and loading it onto another vessel to be carried to the final port of discharge.
 Smaller feeder vessels bring cargo containers to the transshipment hub from the ports which large container ships can’t access due to depth restrictions — many of India’s major ports do not have deep draft required for such ships.
 In case of imports, large container ships bring cargo to the transshipment hubs like Colombo and Singapore, where it is unloaded and then loaded onto smaller ships, which can access ports with shallow draft.
 Currently, nearly 25 per cent of Indian originating and destined container traffic is transshipped through foreign ports like Colombo, Singapore, Kelang (Malaysia) and Jebel Ali (United Arab Emirates).
 More than 80 per cent of this transshipment is handled by Colombo, Singapore and Klang ports. Transshipment containers from India form about 45 per cent of Colombo port’s total container transshipment volume.
o This translates into an estimated total loss of Rs 3,000-4,500 crore to economy
 A transshipment terminal in the Andaman and Nicobar Islands — the most technically and financially feasible location is Galathea Bay — will be closer to India’s eastern coast, Bangladesh and Myanmar than Singapore and Klang, which currently serve as major transshipment hubs in this region.

ISSUES WITH PROJECT:
 Lack of details on seismic and tsunami hazards, freshwater requirement details, and details of the impact on the Giant Leatherback turtle.
 No details of the trees to be felled—a number that could run into millions since 130 sq. km. of the project area has some of the finest tropical forests in India.
 A number of additional issues include about Galathea Bay, the site of the port and the centrepiece of the NITI Aayog proposal.
o Galathea Bay is an iconic nesting site in India of the enigmatic Giant Leatherback, the world’s largest marine turtle—borne out by surveys done over three decades.
o Ecological surveys in the last few years have reported a number of new species, many restricted to just the Galathea region.
o These include the critically endangered Nicobar shrew, the Great Nicobar crake, the Nicobar frog, the Nicobar cat snake, a new skink (Lipinia sp), a new lizard (Dibamus sp,) and a snake of the Lycodon sp that is yet to be described.
 The site selection for the port had been done mainly on technical and financial criteria, ignoring the environmental aspects.

ACTION POINTS LISTED OUT BY THE COMMITTEE:
 There is a need for an independent assessment of terrestrial and marine biodiversity, a study on the impact of dredging, reclamation and port operations, including oil spills.
 The need for studies of alternative sites for the port with a focus on environmental and ecological impact, especially on turtles, analysis of risk-handling capabilities.

 A seismic and tsunami hazard map, a disaster management plan, details of labour, labour camps and their requirements, an assessment of the cumulative impact, and a hydro-geological study to assess impact on round and surface water regimes.

UPSC PRELIMS 2014
Which one of the following pairs of islands is separated from each other by the ‘Ten Degree Channel’?
a) Andaman and Nicobar
b) Nicobar and Sumatra
c) Maldives and Lakshadweep
d) Sumatra and Java

UPSC PRELIMS 2017
Which of the following is geographically closest to Great Nicobar?
a) Sumatra
b) Borneo
c) Java
d) Sri Lanka