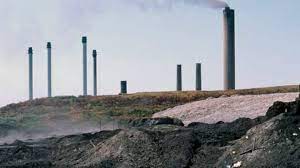 With reference to ‘fly ash’ produced by the power plants using the coal as fuel, which of the following statements is/are correct?

Select the correct answer using the code given below