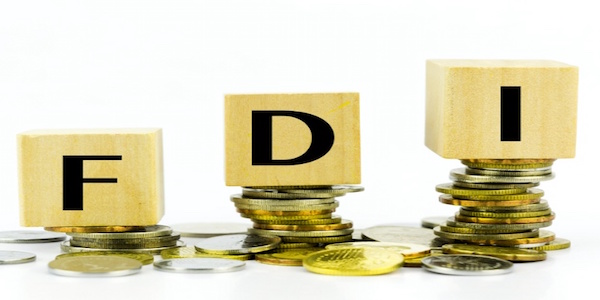 TOP INVESTORS:
 Singapore emerged as the top investor with almost a third of all investments, followed by the US which accounted for 23% of FDI and Mauritius from where 9% of the foreign capital flows originated.

SHARPEST GROWTH FROM SAUDI ARABIA:
 The sharpest growth among the top 10 FDI-origin countries was recorded from Saudi Arabia.
 Investments jumped from $90 million in 2019-20 to $2.8 billion in 2020-21.

FDI EQUITY:
 FDI equity flows from the US more than doubled during the year compared with 2019-20, while investments from the UK surged 44%.

TOP SECTORS:
 Computer software and hardware has emerged as the top sector during 2020-21 with about 44% share of the total FDI equity inflow.
 These are followed by construction (infrastructure) activities (13%) and services sector (8%), respectively.

FOREIGN DIRECT INVESTMENT
 Definition: FDI is the process whereby residents of one country (the home country) acquire ownership of assets for the purpose of controlling the production, distribution and other activities of a firm in another country (the host country).
 It is different from Foreign Portfolio Investment where the foreign entity merely buys stocks and bonds of a company. FPI does not provide the investor with control over the business.

ROUTES THROUGH WHICH INDIA GETS FDI:
 Automatic Route: In this, the foreign entity does not require the prior approval of the government or the RBI.
 Government Route: In this, the foreign entity has to take the approval of the government.
 The Foreign Investment Facilitation Portal (FIFP) facilitates the single window clearance of applications which are through approval route.
 It is administered by the Department for Promotion of Industry and Internal Trade (DPIIT), Ministry of Commerce and Industry.

GOVERNMENT MEASURES TO PROMOTE FDI:
 In 2020, factors such as a swift response in combating the Covid crisis, favourable demographics, impressive mobile and internet penetration, massive consumption and technology uptake, played an important role in attracting the investments.
 Launch of Schemes attracting investments, such as, National technical Textile Mission, Production Linked Incentive Scheme, Pradhan Mantri Kisan SAMPADA Yojana, etc.
 The government has elaborated upon the initiatives under the Atmanirbhar Bharat to encourage investments in different sectors.
 As a part of its Make in India initiative to promote domestic manufacturing, India deregulated FDI rules for several sectors over the last few years.